This feature integrates with the Mapbox Directions API to create augmented-reality routes in real-time, allowing the application user to view directions, navigation instructions, distances, and a guiding line on the ground.

The Routes and Navigation feature is specially well suited for guiding user through outdoor expositions, events, concerts, zoos, treasure hunts, you name it!

The base of this feature is the MapboxRoutes component. In the following sections will get in detail on how to use this component to create location-besed AR experiences with navigation, how to create custom routes to places not mapped by Mapbox, and how to customize everything by creating scripts to build your unique experience.

Create a new scene in unity. Then right-click on the Hirarchy window and click on AR+GPS -> Create Basic Scene Structure.

Next, on the same context menu, click on the AR+GPS -> Mapbox Route button. This will create a GameObject with the name MapboxRoute on your scene, containing all the components necessary for a minimally working route experience:

Now head over to the tokens section of your mapbox account page, and either create a new token or copy an existing token and paste it on the Mapbox Token property of the MapboxRoute component in the inspector:

This step is essential since the we can't access the mapbox API without this token.

The next step if configuring our route. For a simple example we can just use a hard-coded one, but you can configure the route at runtime for a dynamic experience.

Each Waypoint can be of three different types:

For our basic example the default setting will do. It will create a route starting at the user's location, and ending at the address defined by Query.

So go ahead and write the address of a place near you as the query! You can use this mapbox playground to test the query before using it here.

And... That's about it! Build your project, deploy it do your device and test it out! You should see something like this: 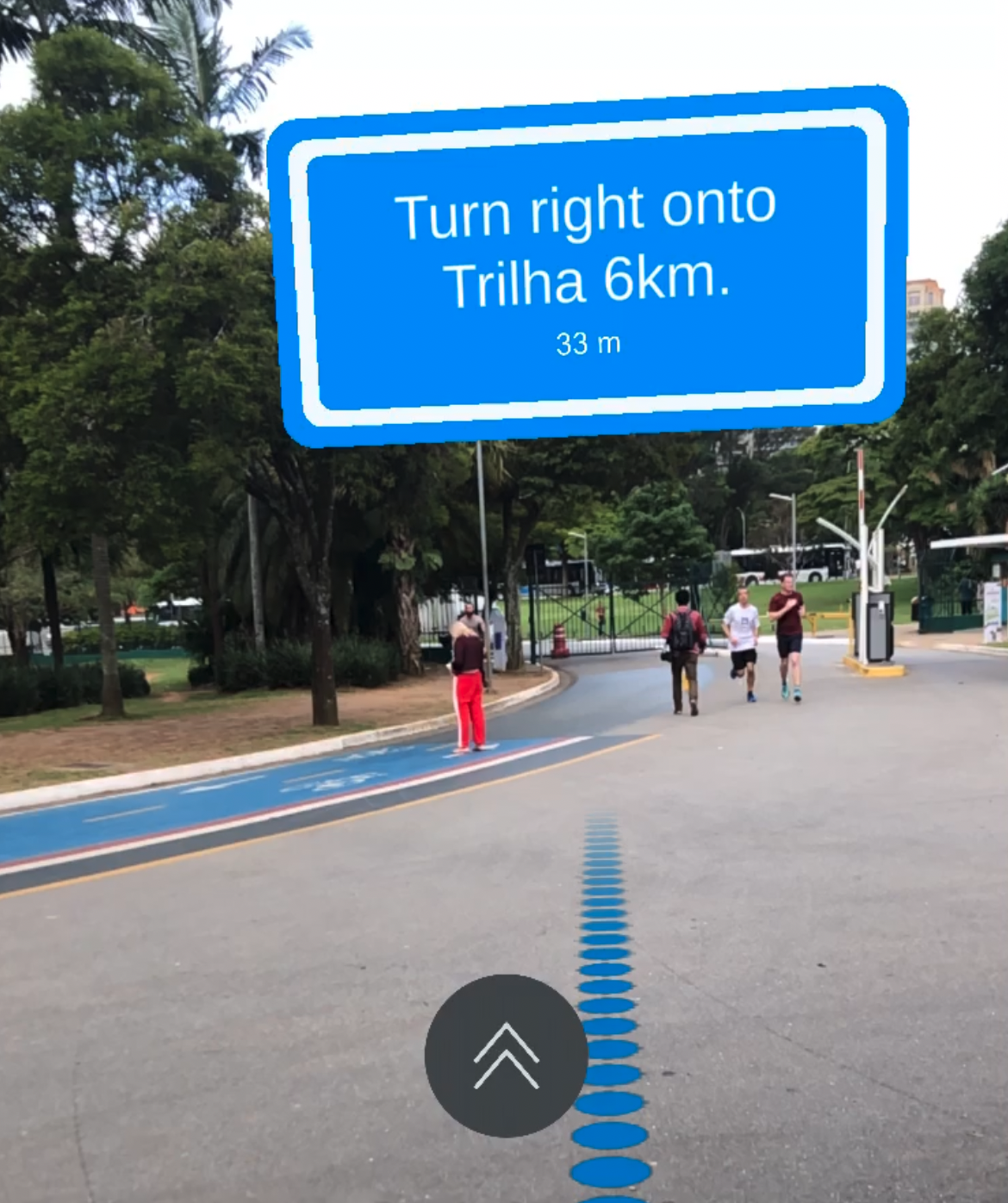 A Route is a sequence of line segments which the user must walk through to arrive at his destination Waypont beginning from his starting Waypoint.

Each segment is called a route Step, and it's defined by two geo-coordinates along with a instruction the user must perform while moving along this route step as well some additional data.

The actual route between each Step does not have to be a straight line/segment, but can gave its own complex geometry.

You are not limited to routes provided by the mapbox Directions API. You can also create Custom Routes using your own data. For instance if you are trying to crate routes for an area or venue which does not have routes in mapbox you will want to use this feature.

To create a custom route, right click on the Projects folder, and in the context menu click on Create->AR+GPS->Route. 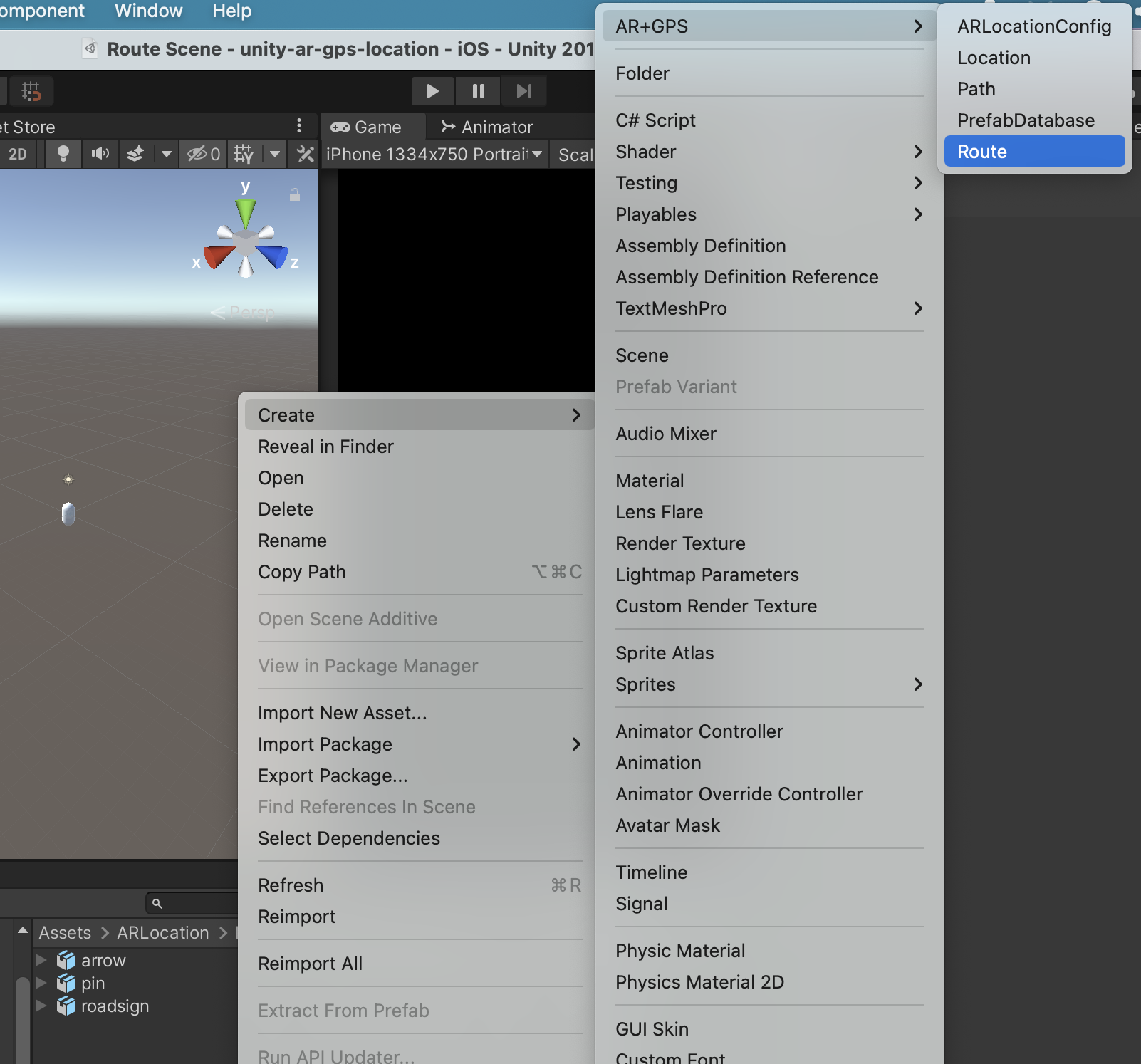 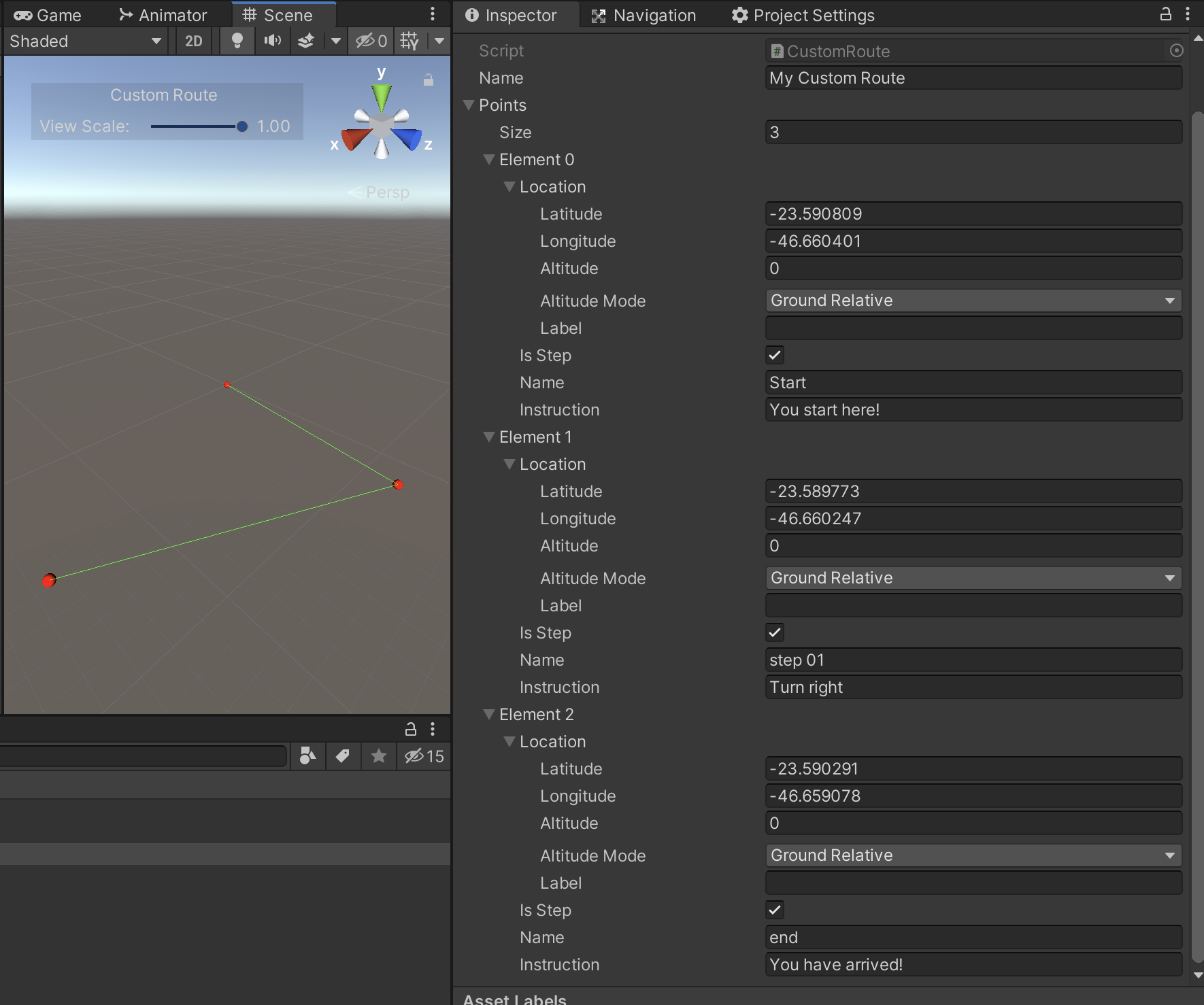 You can import kml created in an application such as Google earth to create custom routes easily.

Lets go through a step by step guide on how to do it. 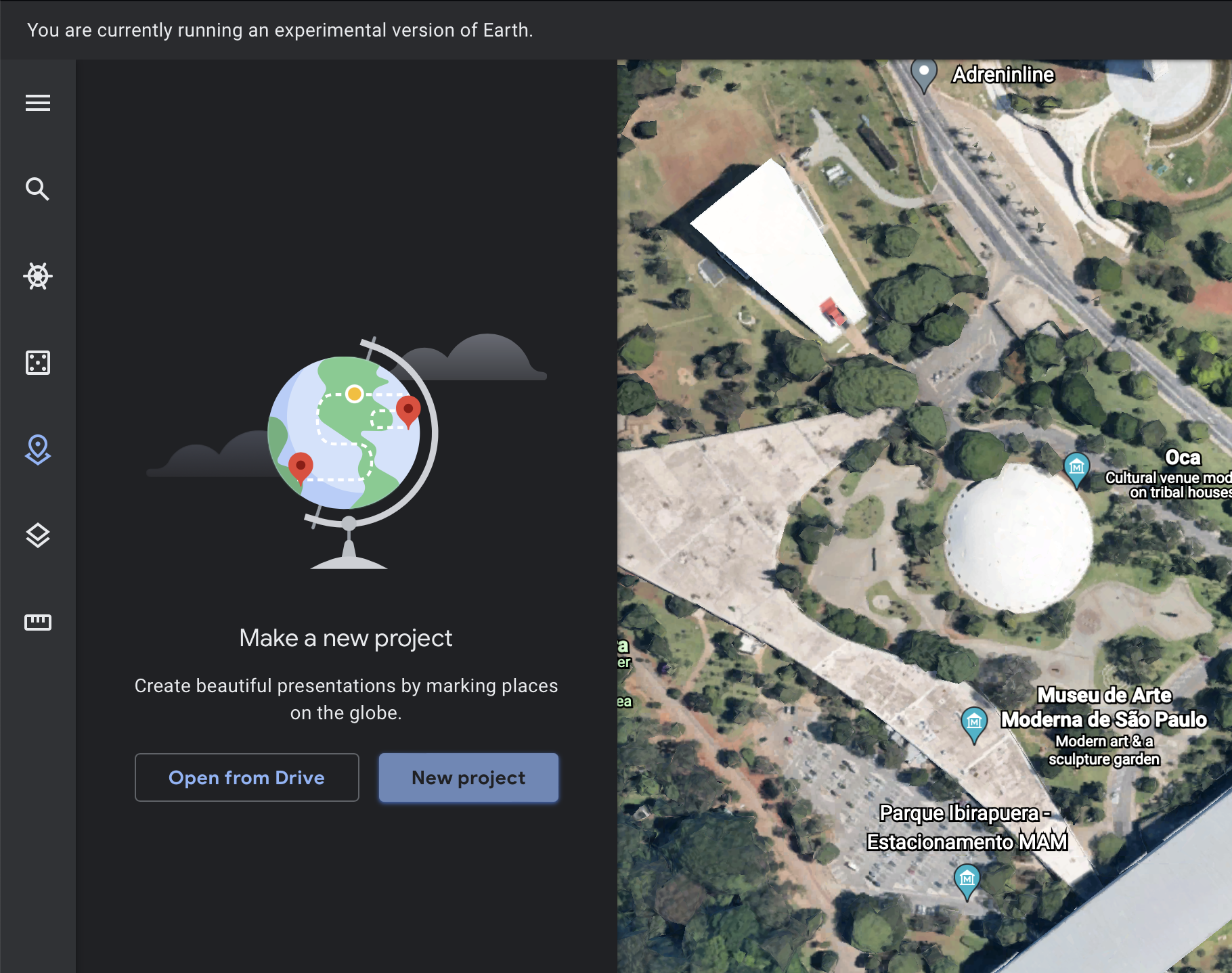 Next click on New Feature and then on Draw line or shape. 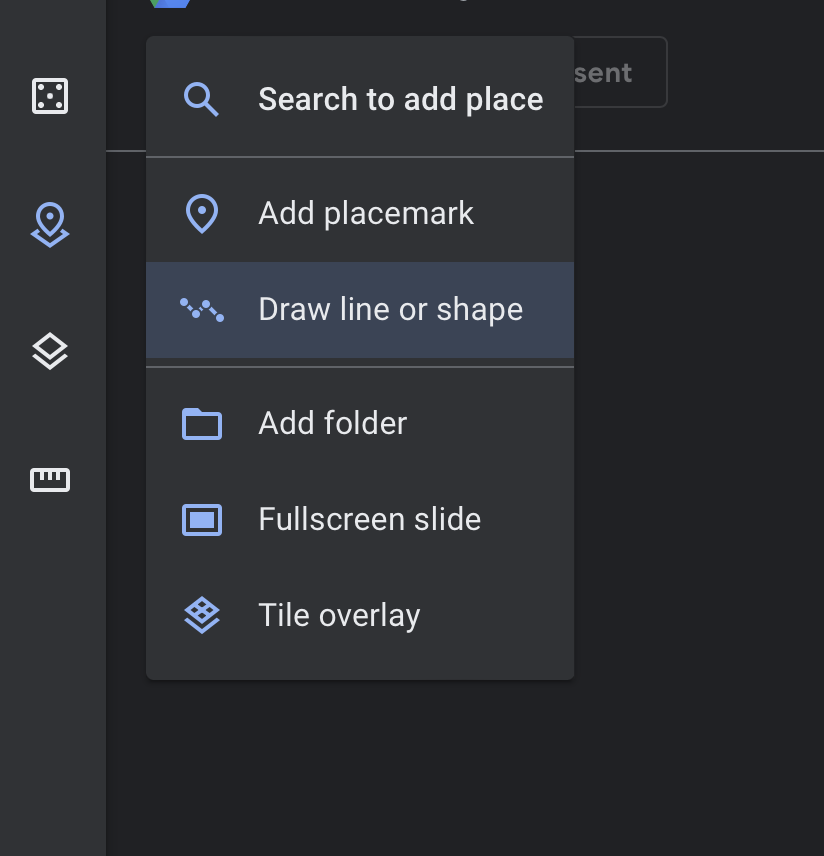 You can then draw your route by adding points to the line. Remember that not all points need to be Steps with maneuvers; some can be just for geometry. 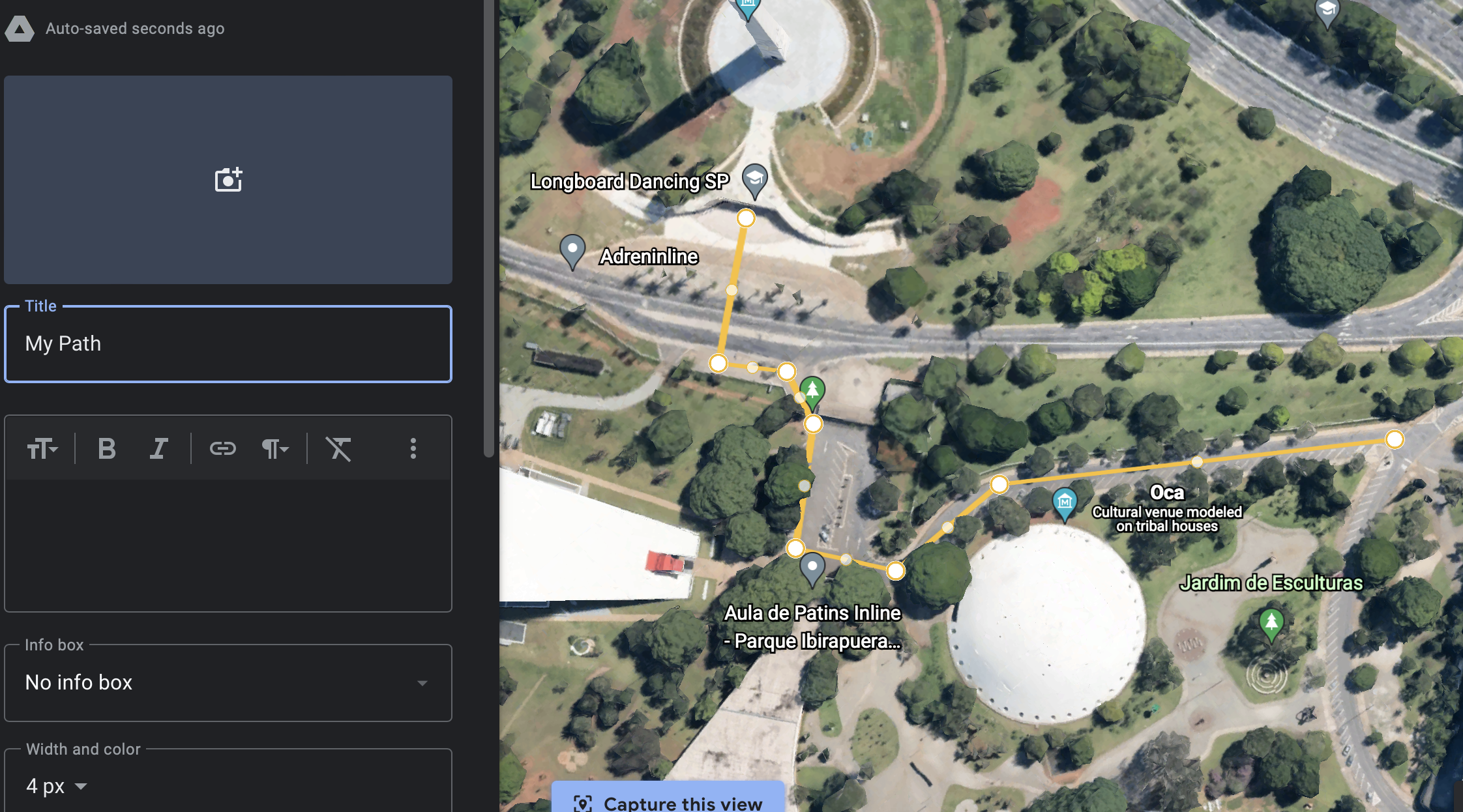 After your route's path is drawn, you can export your KML file and download it to your computer. 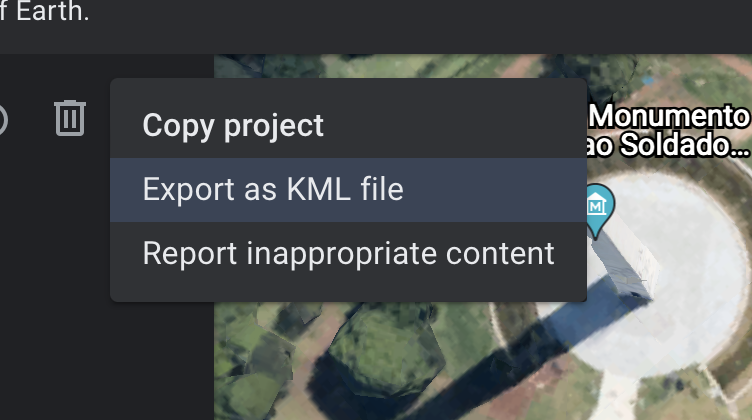 Now import the kml file into your Unity project, e.g., by dragging the file to the Project tab. Then right-click on the imported .kml file and click on AR+GPS -> Custom Route From KML.

A new Custom Route asset will be created with the data imported from the KML file. 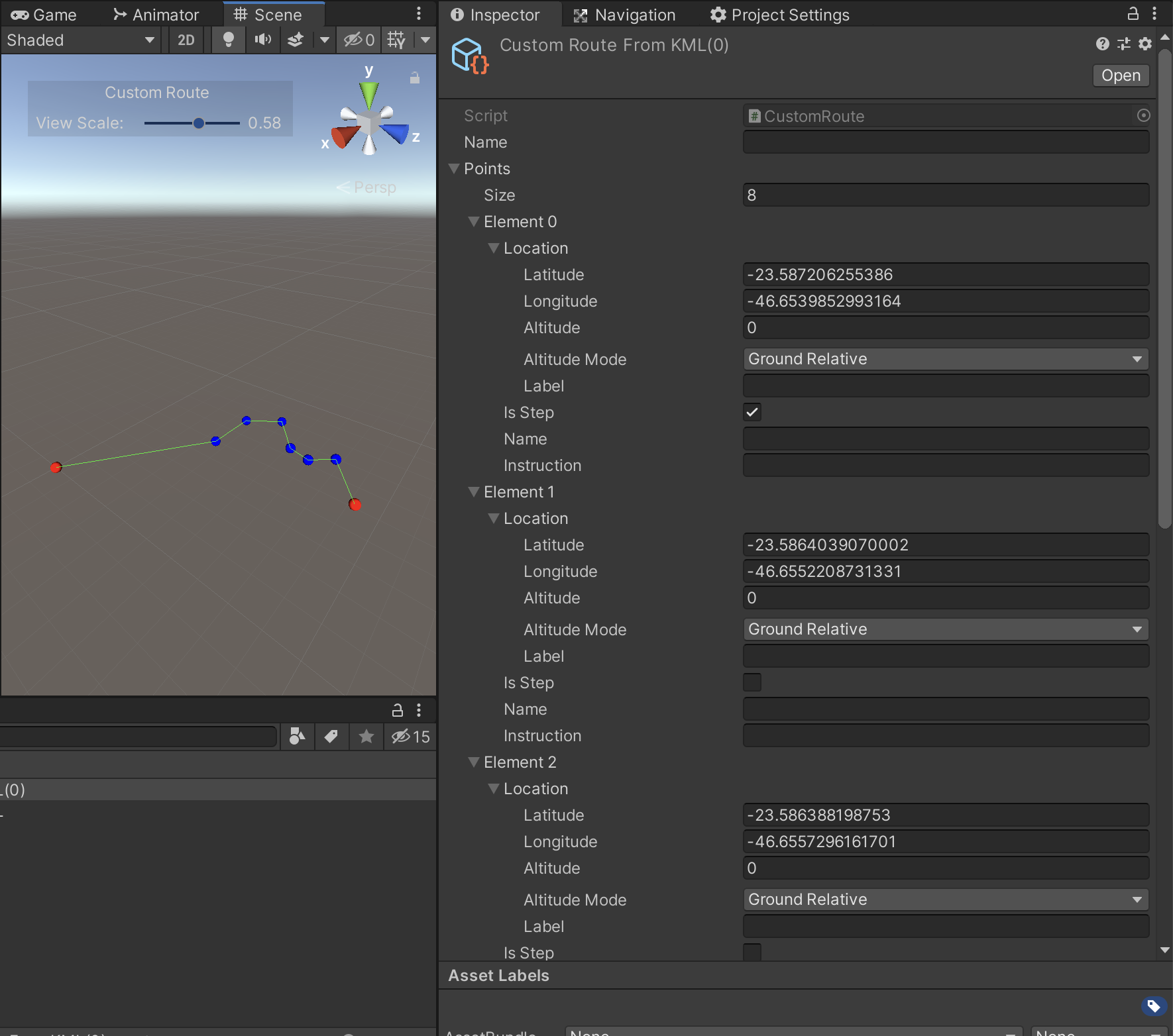 Now you'll need to pick which points from the route will be Step points, and add navigation instructions to these points. 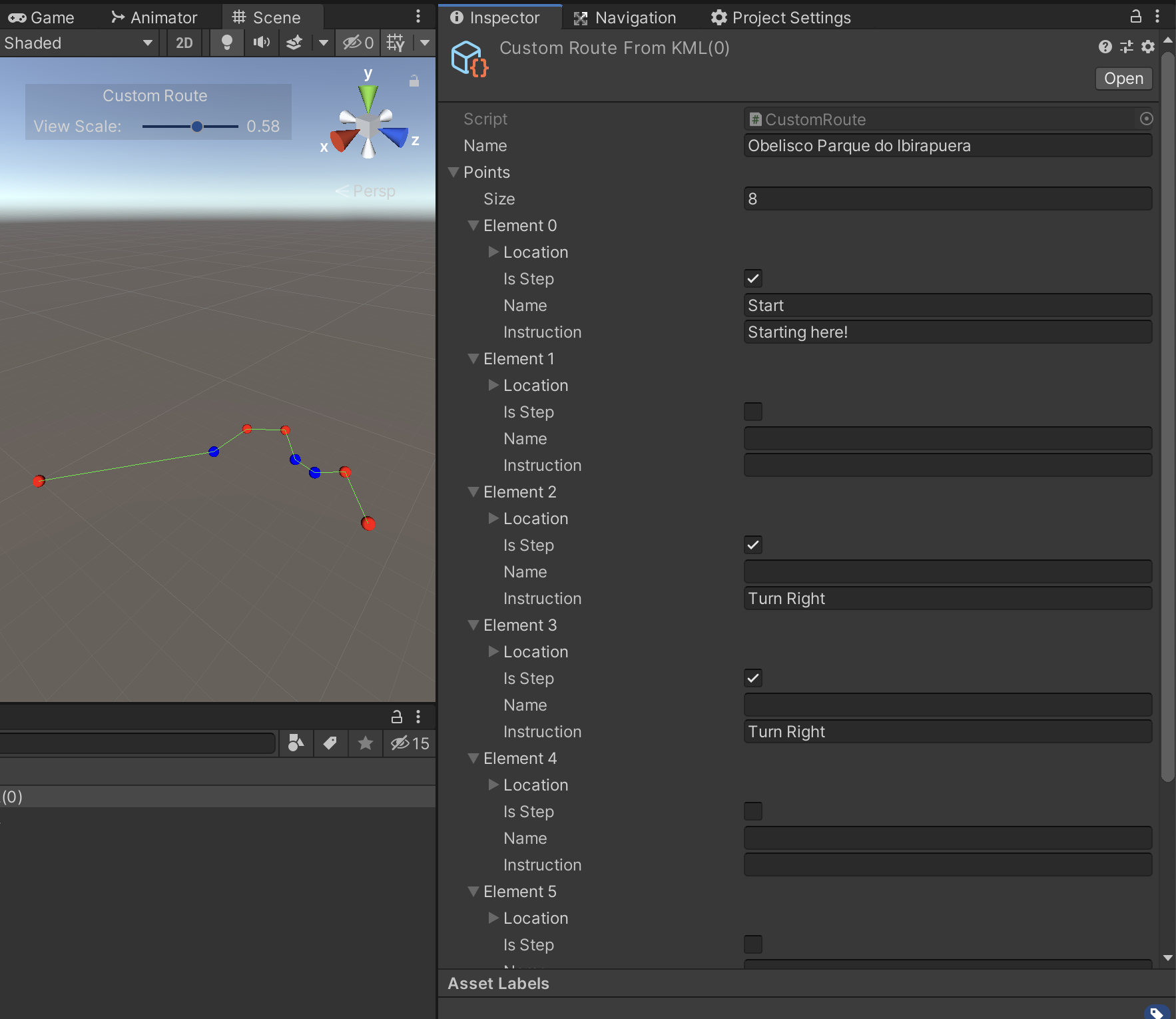 And now your Custom Route is ready to be used in your application! 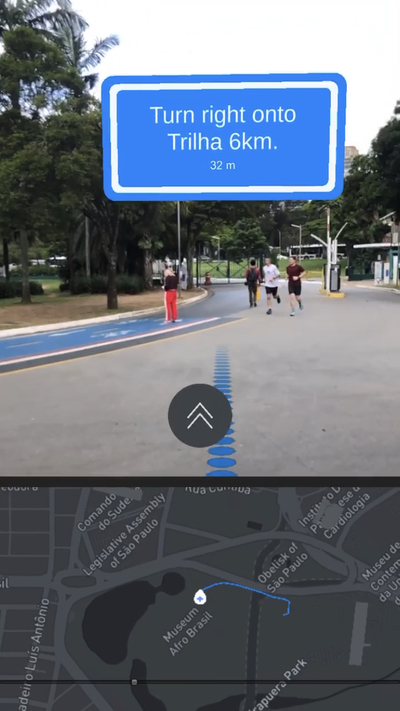 This abstract class derived from Monobehaviour is used to implement the rendering of the line indicating the route's path to the user.

This abstract class derived from Monobehaviour is used to implement the on-screen indicator arrow that indicates to the user the direction where the next target is located when it is out of screen view.

This abstract class derived from Monobehaviour is used to create components that are attached to each of the route's Steps to help guiding the user in various ways.

Each instance of this abstract class will be attached to a specific Step of the route.

A Waypoint is a data structure that indicates and start or ending point of a Route. A Waypoint can be one of three types: User Location, Location, or Query. 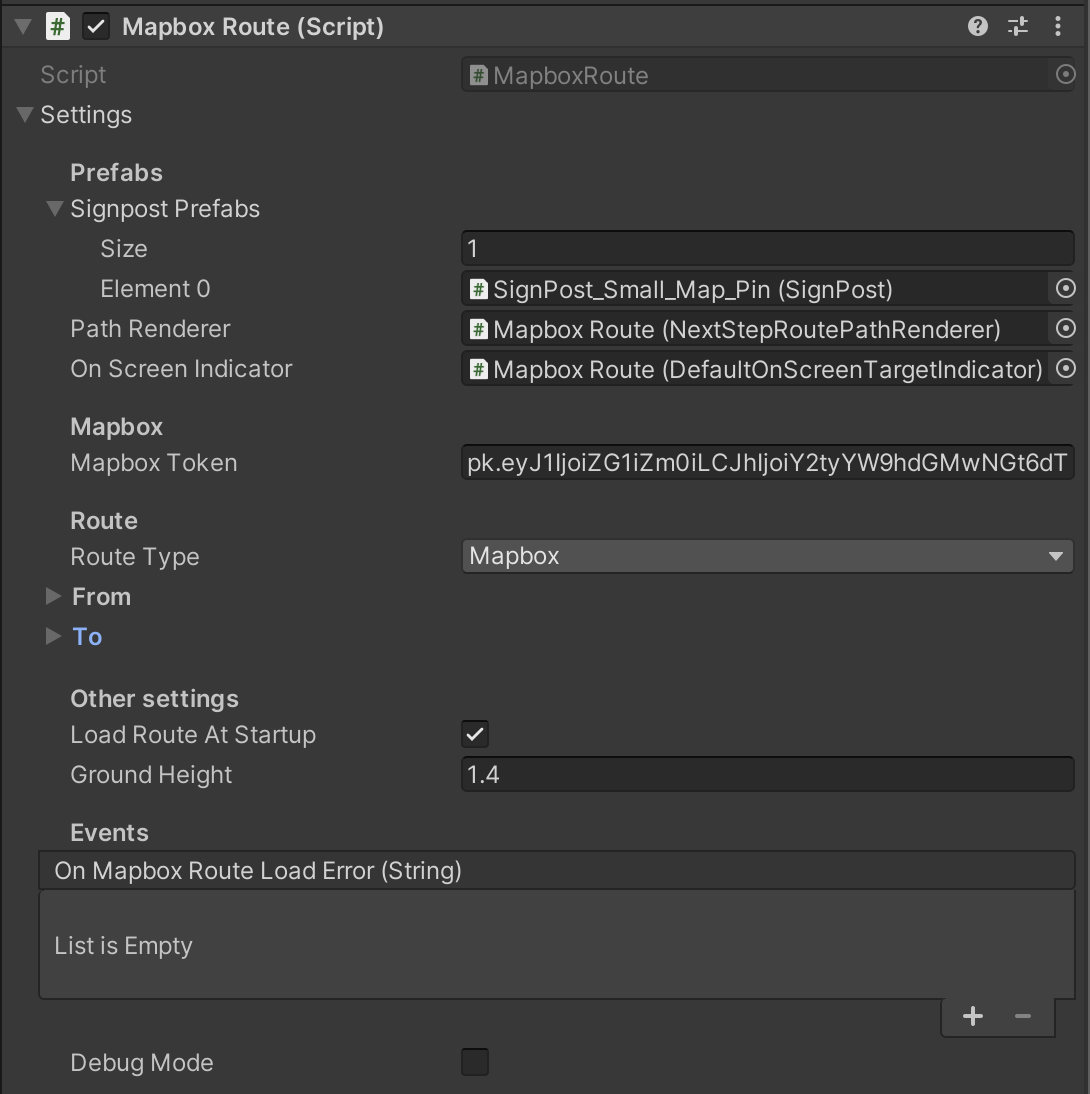 This component, which is derived from AbstractRouteRenderer, renders a line from the current current user position to the next Step as a line on the ground to the user, disregarding geometry due to points which are not Step points.

It does not draw the exact route geometry, but it is useful since it is always visible to the user and shows to him how to get to the next step in a straight line. 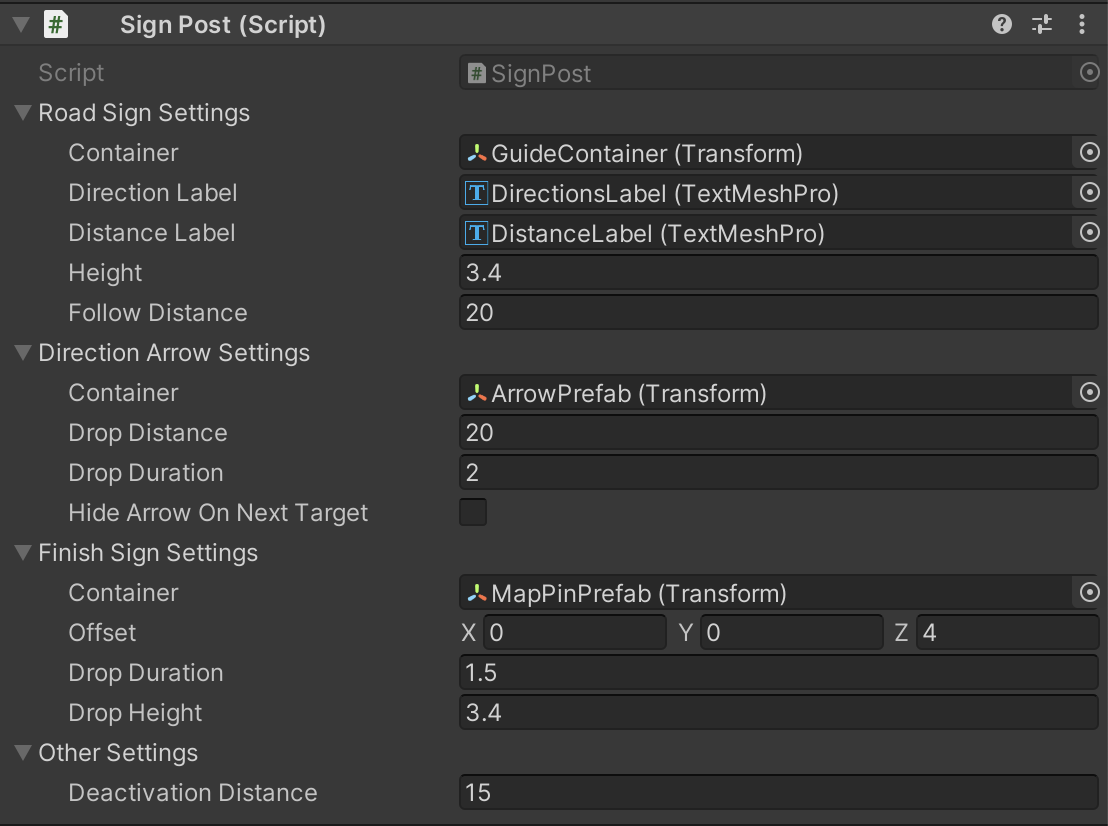 This is our default implementation of the AbstractRouteSignpost Monobehaviour. It consists of three components: